Cheery Blossom is the youngest born of her three siblings. Her brother Briar and sister Juniper all live comfortably in Delimbiyran outside of the Ardeep forest. Born to Dagwood and Holly Blossom, Cheery bordered on the diminutive end of the halfling brood and as such, was very much adored and doted on by her family. A happy childhood and comfortable lifestyle in their shire, nothing was left wanting. She posessed a curiosity and attention to the simple and beautiful things in life, such as watching the breeze rustle the fields of grain on their farm and listening to crickets as they serenaded the coming of evening.

One day when Cheery was just ten years old, she wandered deep within the Ardeep forest and found herself lost. Coming to grips with the gravity of the situation, her sobs brought her to the attention of a wild boar protecting his territory. As young Cheery faced her doom she was rescued by Garrett Hilltopple, a wizened old hermit said to have cloistered his way into the Ardeep forest after the crown wars ended.

Cheery watched as Garrett conjured plants out of thin air to entangle the beast. Her terror turned to pity as she thought Garrett’s next move was to kill the boar. Cheery pleaded with Garrett to let the beast free. Having no intention of harming it, Garrett spoke with the boar who ambled off to carry on his foraging. Cheery was so awed and deeply moved, she asked the druid to teach her his ways.

Garret was getting on in years and after so much time in seclusion, was very averse to having such a gregarious child in his tutelage. Cheery tried her hardest to convince him she was fit to be his student. And as he led her to the edge of the wood to safety, she very strongly reminded him of the child he once had. Memories of the terrible loss of his family during the crown wars resurfaced and softened his resolve.

Cheery went on for ten years learning under the tutelage of Garrett. She invited him to his home frequently and welcomed him as family and soon, under both their powers, the shire and surrounding farmland prospered. Garrett never stayed long, perferring the solitude of the trees and keeping the balance of the woods.

Praying Silvanus would be pleased to see that Garrett lived his life in his service, Garrett passed on into the great beyond. Cheery had his ashes scattered throughout the Ardeep forest where she knew he was most at ease and returned to the shire where for 3 years she and her people lived in peace.

Lately however, the town’s crops have been failing and her visits to the Ardeep forest have been dangerous as the animals have gotten restless. Her powers being nowhere near as strong as Garrett’s had been, she leaves the shire in search of answers and the strength to improve her skills. 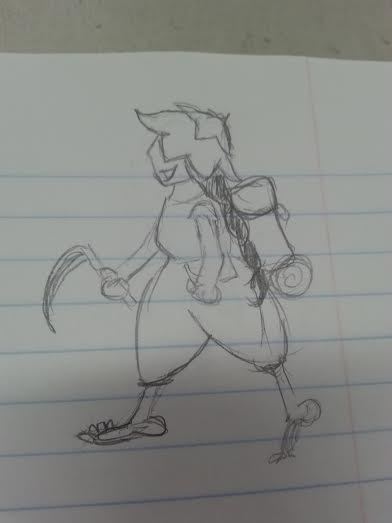